Let’s get this straight. Horizon Zero Dawn is probably one of the most anticipated games of the year, but, is it more of a Fallout 4, or a No Mans Sky? Sorry Xbox users, this is a PS4 exclusive. 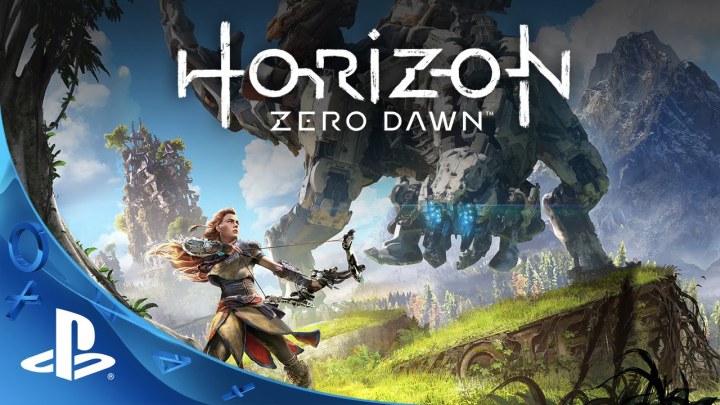 So, I’ve not yet completed the main story line for the game, but I have spent over 5 hours playing it. So I’ve got the basics and I’ve explored a fair amount of the world and I feel like I’m able to talk about the game enough to give a good review of it.

First, some pros…It looks stunning. This is probably the most obvious pro there is. The game is designed to go on the new PS4 Pro (the one that can do 4K Ultra HD) so of course it’s going to look brilliant. But it still doesn’t take away from how well designed the scenery is and how well constructed the buildings and people are.

Secondly, the idea. Everyone’s had that thought, what if the world was taken over by machines? This game is basically that thought, but made better. The machines are animalistic, with some baring a remarkable resemblance to horses and deer, with others seeming to be Dinosaur-like in their design (the Tallnecks have a clear likeliness to a Brachiosaurus). That and the minimal use of machine weaponry (guns, etc) helps add to the aesthetic of the world.

The main character, Aloy, is also a huge pro for this game. Unlike normal RPG’s you don’t get to create your character at the start (a component I thought I’d miss) but the games introduction makes it clear that you don’t need to create your own character in order to relate to them. However, I feel the story would not have made much of a difference if you could change who you played as (then again, I’ve not finished it, so I may be wrong).

Also, the controls for this game do seem really organic. The aiming and shooting controls are standard, so you’ll have nothing new to worry about. Running, moving and jumping are also all what you’d expect. The only addition, that could take some getting used to, is the use of the d-pad to use certain products in your inventory.

Finally, the collecting and crafting in this game is easy to learn and isn’t too confusing that you’d get scared and run away (much like my experience with ARK). The crafting is easy to master and it easily tells you what items you have and what you need to make a certain item.

If I had to point out a flaw, it’s the grind of it all. Most of my time spent playing this game so far has been sneaking about, killing machines and harvesting plants and trees. Gathering material, crafting items, and leveling up just to do it all again. Yes, I understand that this is a valuable part of the game, and some quests and tasks have required me to kill certain machines. But, unlike other RPGs such as Skyrim and Fallout, if you come across a machine or ‘herd’ it’s very difficult to pass through them without being noticed and attacked. This adds to how long you play the game for and how quickly you complete each quest, which for me is why I only really complete one quest before turning the game off again, just because of how long it took me to do. A good time waster, but not good if you’re in a rush and have to turn the game off by a certain time. This is all made worse by the fact that you can only save at camp fires, this does add a level of risk to the game, but it can get really annoying if you die and haven’t passed a campfire in a good couple of hours…

Overall though, I have enjoyed the start of Horizon Zero Dawn, and I’ve no doubt i’ll continue to enjoy playing it. I recommend it for anyone who loves RPGs and loves the post-apocalyptic setting.