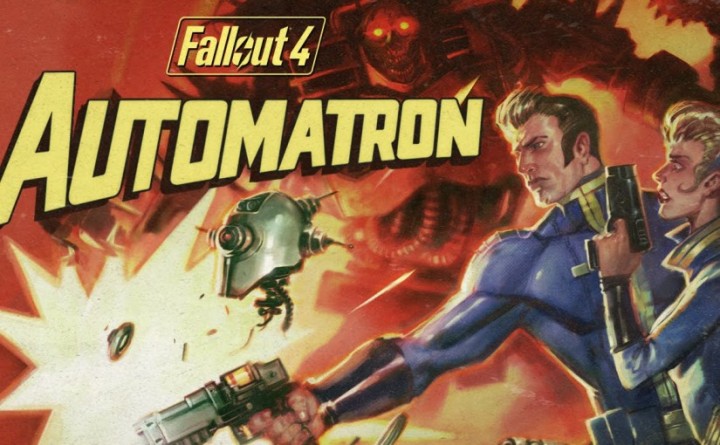 Okay, with DLC’s coming thick and fast for Fallout 4 (two in two months with a 3rd expected next month), I thought i’d take a look at the first two DLC’s that have been released: Automatron and Wasteland Workshop.

Fallout 4 is a RPG/Action/Open World game created by Bethesda and is available on PS4, Xbox One and PC. I have done a previous review of the main game so go check that out HERE if you haven’t already

Okay, now onto the DLC.

Automatron is the first DLC available for Fallout 4 and it is available for around £8 in the UK and $10 in the US. It adds a completely new side quest to the game as well as new materials, structures, weapons and armour.

The quest itself could last you anywhere between 1 hour to 5 hours, it depends on how you play the game. Whether or not you pick up everything thats on the floor or if you just want to rush through the story as quickly as possible. For me it took about 2/3 hours overall, i wanted to get a good idea as to what new weapons there were in the world and I wanted to explore what I could create with these new weapons and the new armour.

The quest itself follows the plot of evil robots attack innocent people across the Commonwealth, with them all being controlled by the mysterious Mechanist. Your job? To hunt down the Mechanist, kill their robots and put an end to their evil rein of tyranny. Of course, this is a Fallout quest so there is an inevitable plot twist, but I shan’t spoil that on here, I’ll leave that for you to discover yourself like I did when i played through it.

As well as the quest, there is a variety of different weapons you can now own but, as of so far, I haven’t come across anything too special or at least anything that stood out to me. One thing that is pretty good however, is the fact that you can now create your own robots. These robots can be used as companions to take with you as you explore of they can be set to work at your settlement and help out. There is a variety of different ways you can design your robots and you’re pretty much left to your imagination as to what you can design but I do find the creation systems a bit confusing and you also need a lot of specialised material in order to create the robots as well as needing high science ranks and weapon ranks to unlock the best combinations available for your creation.

Overall Automatron is a great start for the DLC’s for Fallout 4 that Bethesda is releasing. It adds a solid and well-rounded quest to the package as well as some good items for you to collect.

The second DLC that Bethesda released is the Wasteland Workshop DLC. It is available for £4 in the UK and $5 in the US.

For the cheap price of this DLC you can’t really expect to get much from it, and the truth is you don’t. All you really get with this DLC is some more items you can create in your settlement workshop.

Admittedly these items do include cages that you can use to capture a wide range of creatures to either guard your settlement or pit against each other, as well as some new neon lights that you can place around your settlement (don’t know how or why Bethesda thought of neon lights but there ya go). A downside to these new items is that you need power to operate all of the cages and you also need a lot of rare items in order to create the cages and set the traps.

As well as this you also need a high charisma level and you need certain animal perks within that section, making it difficult for younger saves to take full advantage of the new items, which is quite unlike the Automatron DLC that game out beforehand.

Overall this DLC isn’t one I’d rush out to buy but it is a good addition if you want new items and is best suited for someone who has actually finished the main story line and is quite a high level in the game.

So there ya go, my thoughts on the two new DLC’s  for Fallout 4 and when the 3rd comes out next month, I’ll try and review that as soon as I can. I also hope to review the rebooted Ratchet and Clank game that comes out next week and maybe some Lego games too.